Infinix Zero 3 is unlike anything Infinix Mobility has ever done and it’s only right to say this is the company’s best device so far. It’s a smartphone in the upper tier of the mid-range division and the specifications make it a worthy alternative to some high-end devices in the Nigerian mobile market right now. 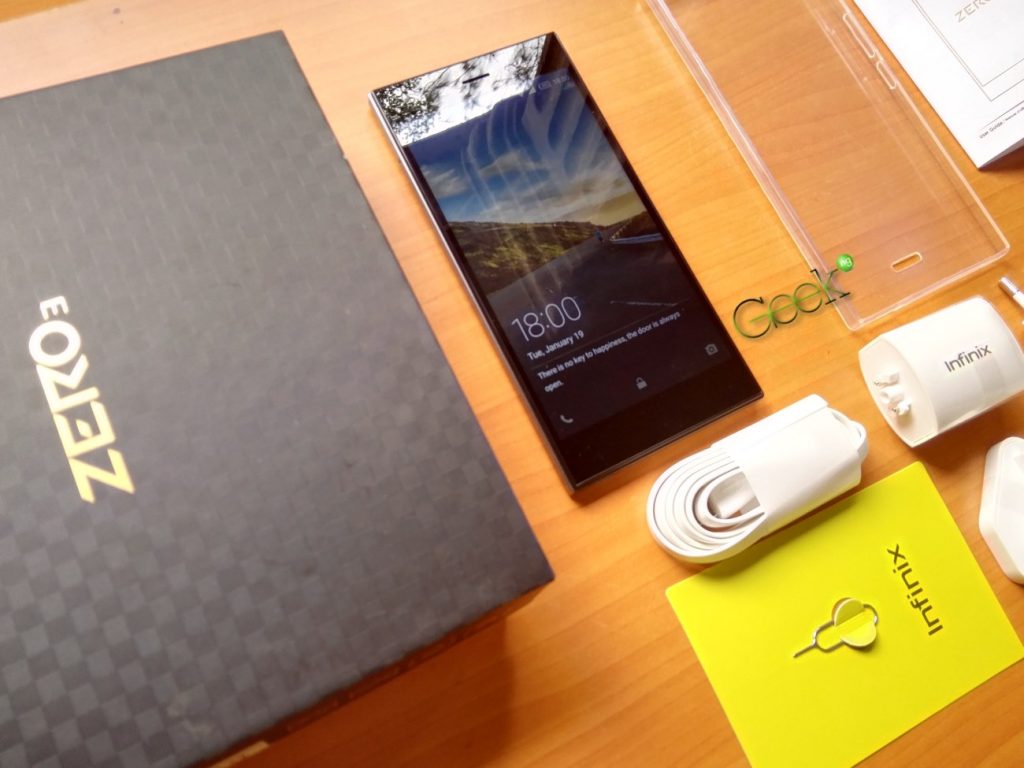 We unboxed this device a while back and you can watch the video on this page. We simply love the Zero 3. It’s an awesome device and the performance is just great.

Infinix Zero 3 has a design reminiscent of the Hot 2 and the original Infinix Zero but a few tests shows the company has actually beefed up the quality. The back cover, for example, looks glossy and made of glass. Devices with glossy back covers often end up looking ugly as their back covers, in most cases, are made of low quality materials. 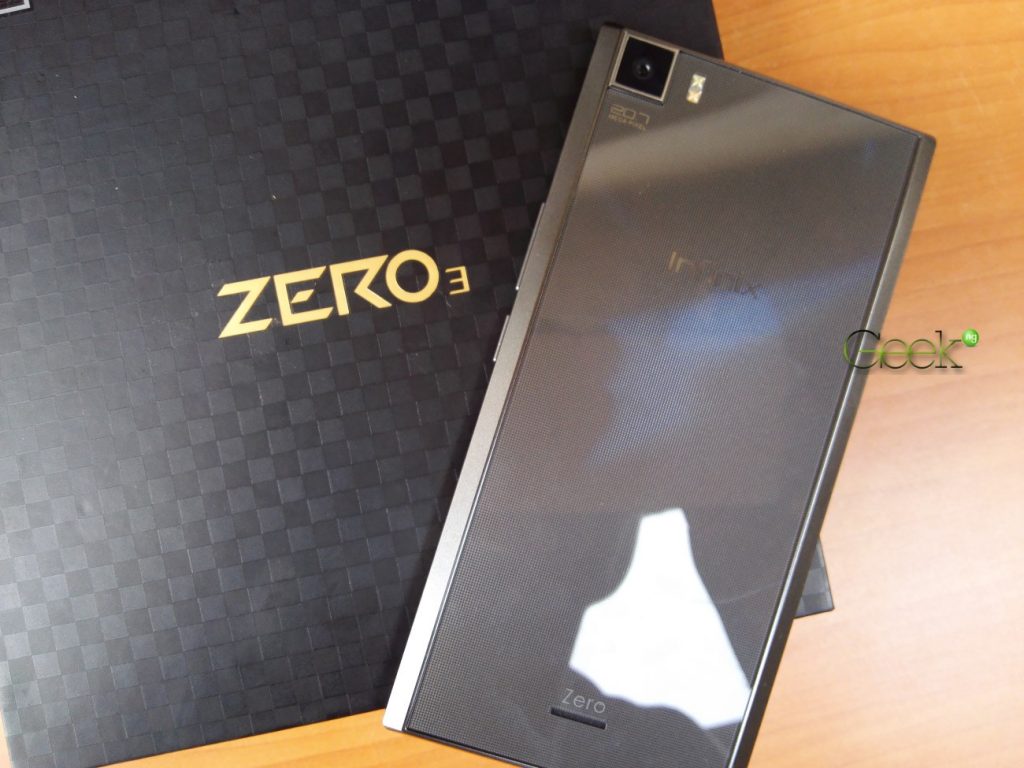 The Infinix Zero 3 proved to be different. We actually tried scratching the back cover with a pin and there was not a single trace. Even under pressure, the pin made absolutely no scratch on the back cover. Still at the back, the top left has the 20.7MP camera in a square frame with a slight bulge and just beside it is the dual LED flash.

Further down is the speaker. This is our first dislike, the speaker placement on the Zero 2 is a lot more preferable. You probably wouldn’t care anyway if you play music or watch videos through earphones. The edge around the back starts with an angular bevel that turns to the side frame.

Flipping the phone over, right above the 5.5-inch screen is the earpiece flanked on each sides by the 5MP secondary camera and LED flash. Just at the top of the speaker is the notification light.

The bezel isn’t the thinnest around though. It leaves some extra padding especially at the bottom. At the first look, one might think the soft keys are placed at the bottom but they’re actually on the screen. 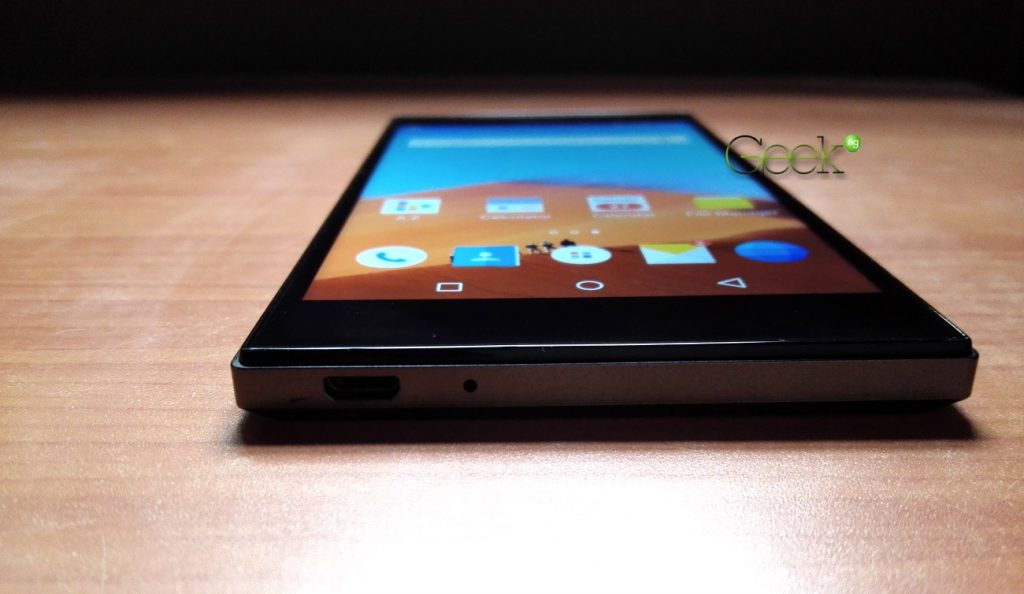 At the bottom is the micro-USB port shifted to the left and just beside it is the tiny microphone hole. At the top is the earphone jack and there’s another tiny hole. Our best guess is that this is the noise-cancelling microphone. 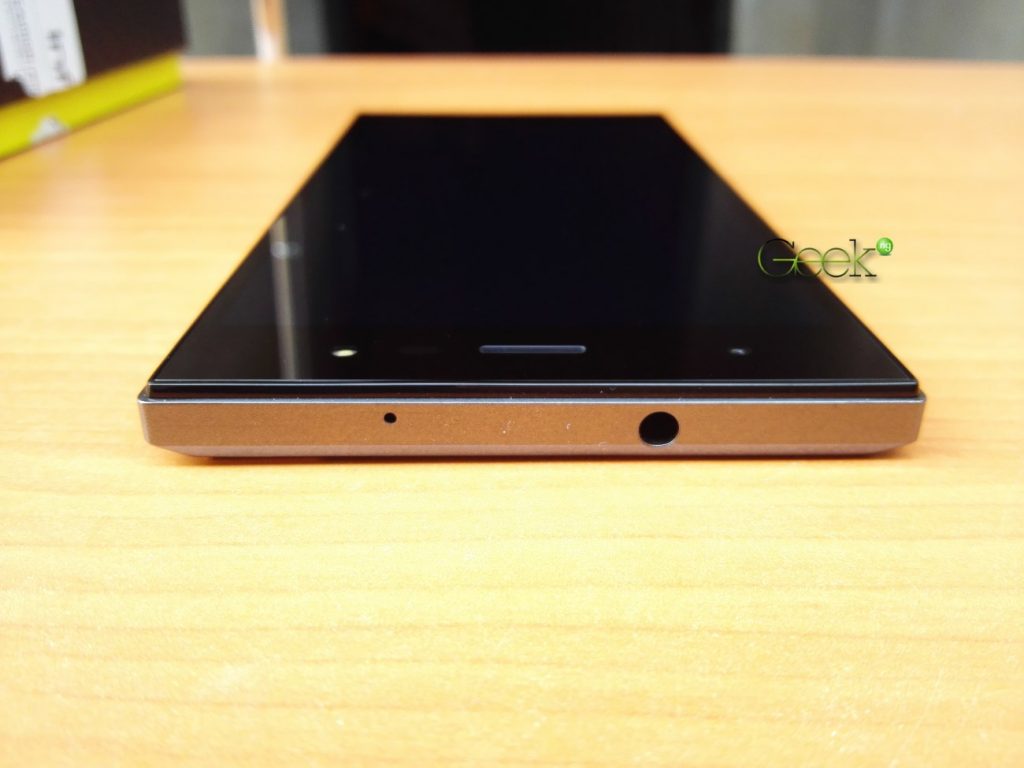 On the right side is the microSD card slot, the volume rocker and power button while the SIM tray housing two micro-SIM cards is on the left. 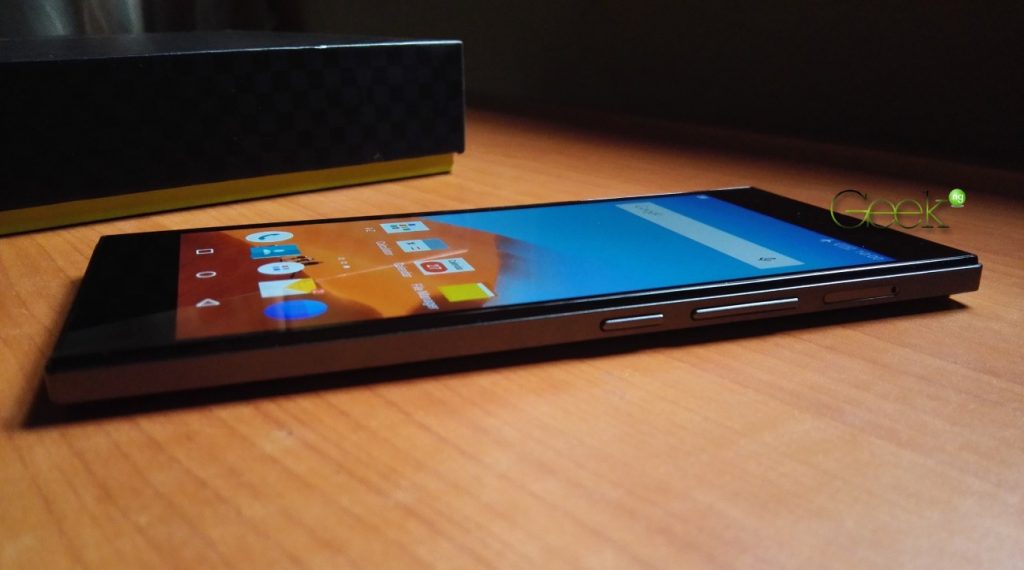 Although the design is good, the excitement is dulled because it’s a look that appears familiar. The quality is good though and the fact that the back cover will not easily scratch is a big plus. It’s perfectly safe to use without protection if you’re not gonna be dropping it every now and then. Anyway, Infinix includes a free transparent cover that improves grip and protects the device.

Unlike its predecessor, the display isn’t Super AMOLED but the 5.5-inch screen is clear and bright. The IPS LCD screen has a FHD resolution of 1080×1920 and the display density is about 400ppi.

If you’re buying the Zero 3, chances are that the 20.7MP camera was the first attraction. In the camera department, Infinix Zero 3 didn’t disappoint. The SONY Exmor R™ IMX230 sensor delivers great pictures and the dual LED flash too helps low-light photography. We were actually trying to look out for faults like over-exposure in certain light conditions, unnatural colors and stuffs like this but the camera left us with little to complain about. Here are a few camera samples. 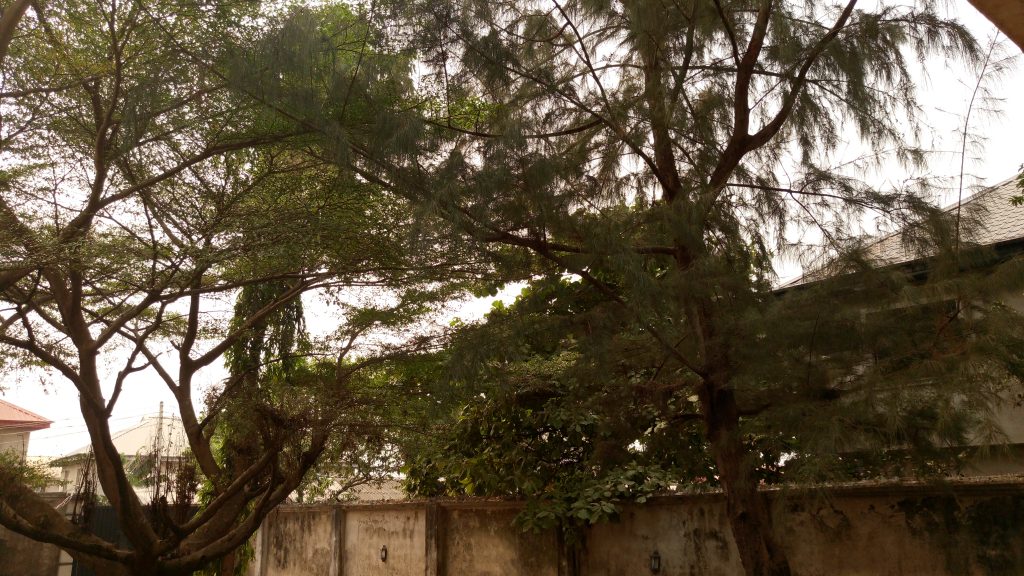 Low light photography too looks good. However, I found the night mode in the camera settings not so useful. I prefer working with the professional mode for best results.

For professionals, there’s a manual mode that lets you tinker with the camera settings. A layman might find this intimidating but even if you’re not a professional photographer, there are practical uses if you take your time to mess around with it. For starters, you should find the exposure time setting extremely useful. 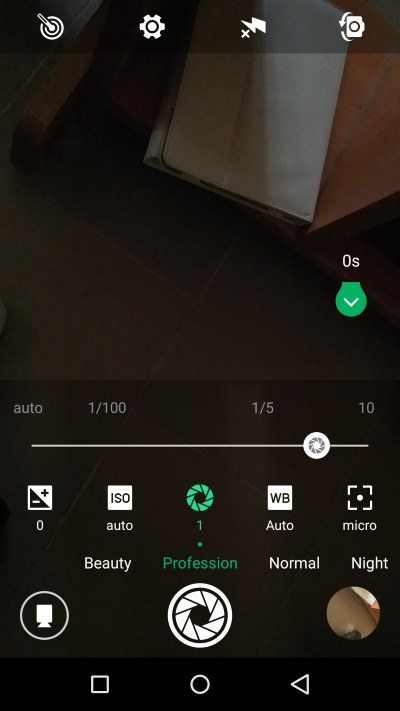 Assuming you want to take a bright picture in a dark room without the LED flash, setting the phone on a tripod and changing the exposure time to 5 seconds as seen in the screenshot below can produce an amazingly bright image. The sample image below was taken in a dark room with normal camera mode:

After tweaking the manual settings and setting the exposure time / shutter speed to 1, the resulting image looked very improved.

The primary camera camera is awesome. The 5MP front camera too takes decent selfies but the trained eye might find the produced image a bit too sharp. However, for Instagram, Facebook and the likes, the beauty mode lets you look actually better than you do in real life.

With the Hot Note series, Infinix set a high standard one might want to use as a benchmark for other devices. The device is powered by a 3030mAh battery which is sufficient. The fast-charge technology charges the phone fully in about one hour and thirty minutes. In worst cases, the device should attain full charge from 0% in 2 hours.

In one of our video loop tests, the device played videos using MX Player for about 6 hours and we were left with 3% from a full charge. During this time, both SIM cards were active and WiFi was turned on.

In another test with the device set in airplane mode, we were able to loop the video for about 7 hours. We’ve seen better results but the latest firmware upgrade promises to further improve battery life.

However, the battery is still enough to last you for the whole day but then, it’s hard to describe what every individual’s ‘normal use’ looks like. With light use (few phone calls, intermittent internet browsing and some very light Facebook app use), I still squeezed a day and a half.

In case you’re running out of battery, there are different power saving modes to help out.

Trying to determine if a device with a 2.0GHz octa-core processor plus a 3GB RAM is fast may not really be necessary. Infinix Zero 3 is powered by a Helio X10 SoC with eight cores. The Antutu benchmark score thrashes some devices in the same price range by a wide margin. 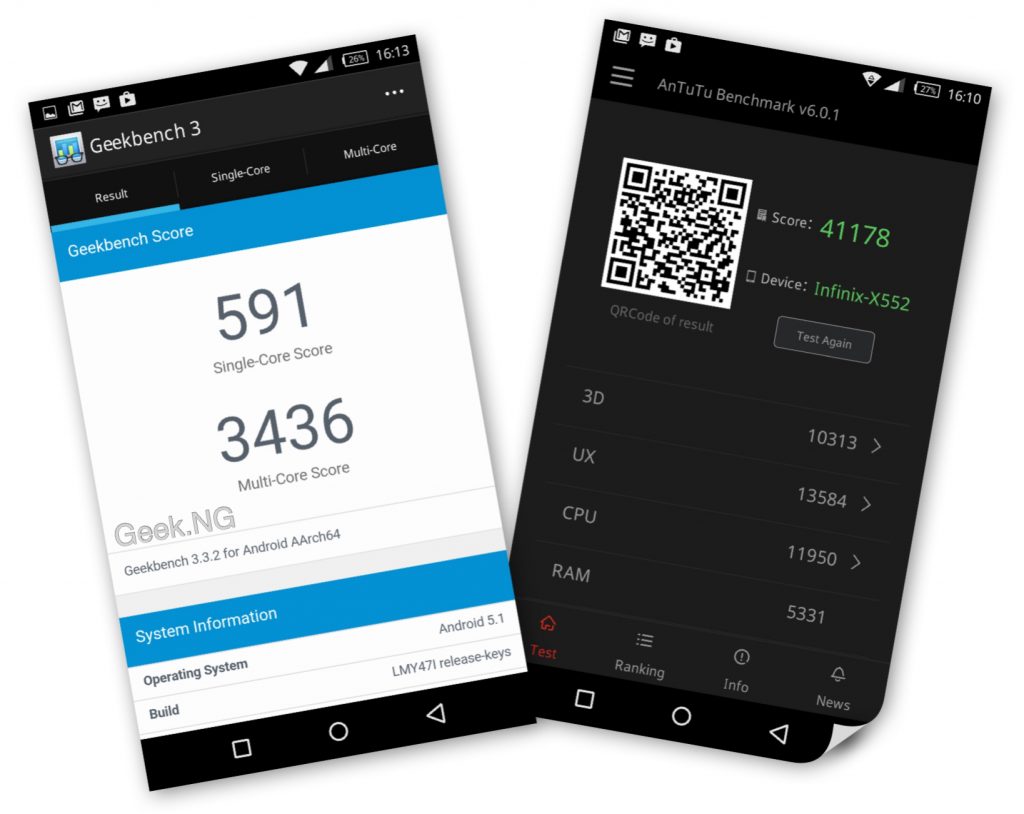 Infinix describes XUI as slim and truly, it is. Compared with EMUI and MiUI, anyone who has been on different platforms should find XUI a lot more better. We explained the issues with this custom UIs in this post and we hope Infinix won’t follow the same path. 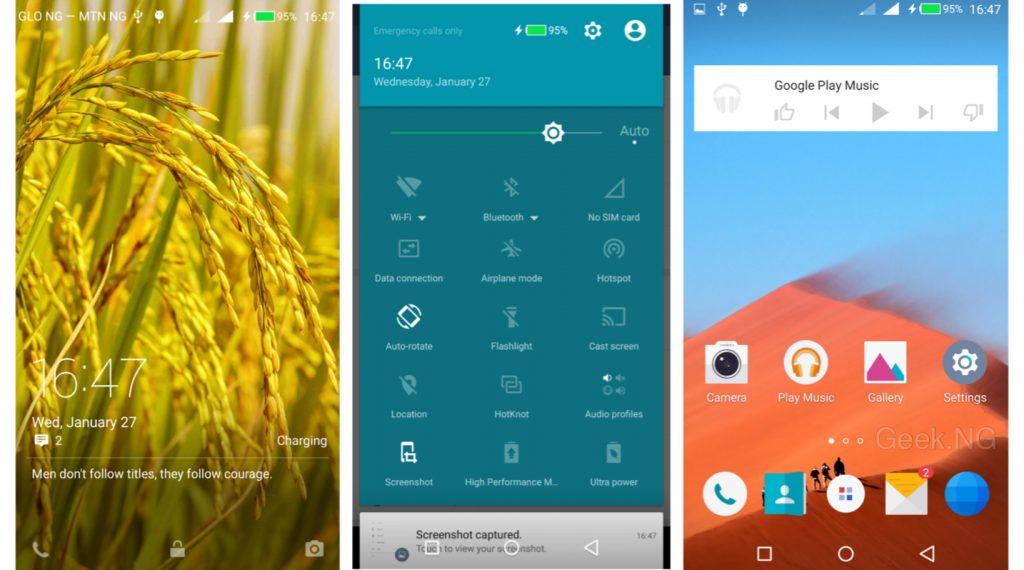 There are useful features packed into the customized Android software powering the hardware. The System Manager app has a section for cleaning up and speeding up the system. Managing apps that automatically launch at startup too is pretty easy. The permission manager lets you manage what each application should be allowed to do. 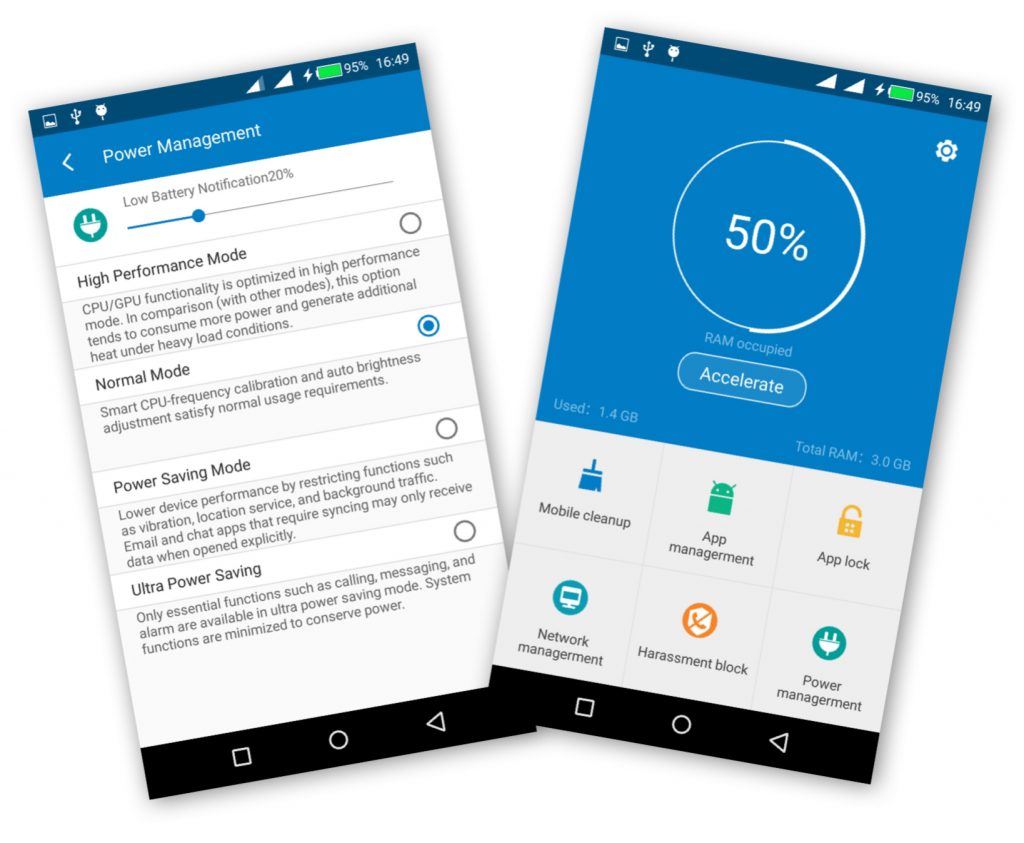 As seen on newer devices with MediaTek processors, Infinix Zero 3 supports HotKnot but it’s a shame the feature is under-utilized in day-to-day use. As a matter of fact, apps like Xender and Flashare have made the feature take the backstage.

Infinix Zero is a powerful smartphone and there’s absolutely no doubt about that. The powerful processor makes it an excellent performer and the 3GB random access memory on a mid-range smartphone makes it even more desirable. Although the design isn’t as exciting as we had hoped, the quality build should not be overlooked. The back cover will not scratch easily, we made sure we checked that. Nevertheless, it wouldn’t be fair not to inform a potential user that phone may be slippery to a wet hand.