Some people like to just walk in to a store and buy their computers but some, especially hardcore gamers, usually prefer to have their own PC crafted to suit their taste. Building a computer isn’t a rock-breaker’s job,  it’s generally connecting cables and fitting in the  parts. What most PC builders find difficult is the right components that fits and which components are good or bad. As much as its easy to build a computer, using wrong specs can be the crown prince of chaos.

It’s always easier to walk into a store and pick up your gaming PC or notebook, you may even decide to buy it online at a cheaper price using a voucher code but there are advantages in building your own gaming PC from scratch. For an experienced PC gamer who’s trying to upgrade his PC or new gamer who’s not so conversant with all the technical specifications and all that, I have brought together specs to build a decent gaming PC. 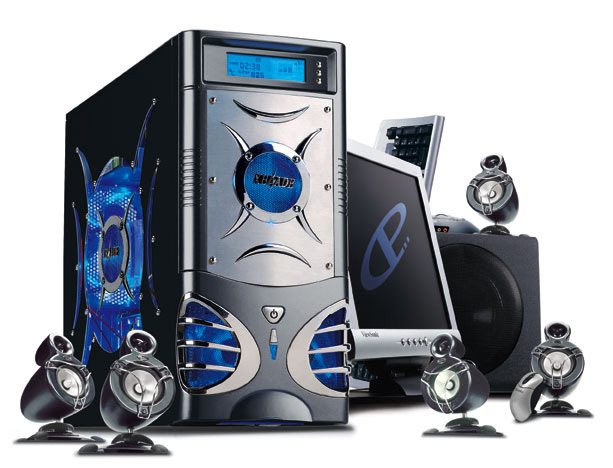 The brain behind your Computer is the processor and of all the manufacturers, I strongly recommend Intel which doesn’t use much power and as a matter of fact, it’s considered faster than its AMD counterpart. (AMD’s are not bad either). There are numbers of Intel processors with different CPU speed and cores. For speed, a minimum of  3.0GHz or higher and cores minimum of 2 is okay, with this recommendation I suggest Intel Core i5-3330 3.0GHz Quad-Core.

Before you’ll chose the amount of RAM for y0ur Gaming PC, you must first ask yourself how much do you need? RAM is a non long-term memory as hard drive, its where data will be streamed to from hard drive, the amount you chose will definitely have great effect on how quickly your computer deals with applications, software tasks and all that – so how much do you need? Since its a gaming computer and memory is among the easiest components to upgrade you can start with 4GB and upgrade later if needed to. Just make damn sure you’re not mixing types.

Must Read: Speed-Up Your PC with These Easy Laptop Repair Tips

I’m sure you don’t want to run out of space when you want to install that crazy game, right? Your hard drive is a like storage that stores and save computer’s data; so, how much data you want your gaming PC to occupy without having amnesia sickness. A 128GB you should be enough to hold any Operating System but if you’re a hardcore gamer, I recommend a minimum of 320GB, you can increase this to 1TB depending on the size of your favorite current games.

If you want a standard gaming PC, this is where to spend most of your money on. The graphic card will be in charge of the visual processing unit of your computer that will thrown out the data its given to those attractive effects. If you’re on budget Nvidia GeForce GTX 660 for $179.99 will be the best approach and if you just won a “lottery game.” Using vouchers at online stores too can get you this at a cheaper price.

Must Read: 3 Recommended Exercises for Bloggers and Those Who Spend Too Much Time on PC

You must definitely consider cable management and adequate ventilation for good airflow before you go ahead and get just any case. A full tower case is recommended since you may need to add more components later. I think Cooler Master Haf X w/ SuperSpeed USB 3.0 is just great.

I intentionally decided to talk about motherboard as the last point to consider but in actual fact, it’s probably the most important because it’s what holds everything listed above together. I recommend certain motherboards from Asus RoG (Republic of Gamers) product line: If you’re a diehard overclocker, you’re definitely gonna love the latest high-end ASUS ROG Maximus VI Formula Z87.

You may choose to get a brand new laptop with Dell offer codes instead of going through all these but it’s actually fun putting the pieces together and building your very own gaming machine. There are other things you must consider in order to build the perfect gaming PC and another is using an effective cooler. This is important to keep things working as they should and to avoid overheating which may get all your computer damaged.