If you’re into serious social marketing, it’s advisable not to put all your eggs in a basket, explore other opportunities on Twitter, Pinterest, Reddit, Google Plus, and the rest of them. Anyway, that’s not the main issue here, I’m just going to list below possible reasons why your Facebook account may be suspended. 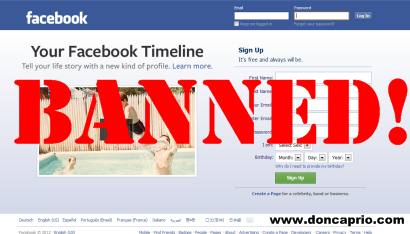 This is the reason most Facebook accounts get suspended. What do you expect when you use the name of an object as a name? Always use your real name on Facebook and even if you must use a fake name, it should be listed as an alias.

2. Posting on walls in rapid succession

When you’re posting stuffs or links on friends’ wall and groups rather too fast, Facebook might have a feeling you’re a bot and kick you out. Some of these bans can be automated so be careful.

3. You’re sending too many friend requests

Sending too many requests or sending friend requests to people you don’t know might get you into trouble. There’s a limit to the number of requests you can send daily and you should get a warning when you reach this limit. Trying to proceed after you get the warning might be dangerous. Also, when you send requests to people you don’t know and you get reported, I don’t think it’s good for you.

You’re supposed to behave yourself on a social network like Facebook, right? Posting offensive updates, pictures and videos isn’t right, you don’t need to be told. If someone reports you, your account is in trouble.

This is spamming and you can get banned by facebook bots if you do this. I hate spammers, so does Facebook.

6. You’re poking rather too much

I’m not sure how far this is true, but it’s rumored that your account might be disabled when you’re poking people rather “too much.”

Just a few months back, there was a problem with facebook having pornographic pitures all over the place. It was caused by a virus and I read that Facebook “isolated” accounts affected by the virus. You should also be careful with applications you use on Facebook.

8. You’re liking too many fan pages

10. Affiliation with a doubtful organization or page

You shouldn’t join an extremist group or like pages that promote violence.

Lots of people have two or more Facebook accounts and Facebook may decide anytime to delete duplicate accounts. It does happen, so be careful.

When you create a Facebook profile for a dog, a cat, an organization or anything other than a normal human being, don’t expect the Facebook team to overlook that. Business, organizations, characters should have pages, not profiles.

13. Using a fake date of birth

You can’t post a movie on Facebook and expect not to be dealt with. Videos, images and other copyright materials that are not rightfully yours should not be posted on Facebook.

15. Getting reported by rather too many people

Note: If your account is disabled, there’s absolutely no trick to get you your account back. All you can do is to appeal and hope to get it back. It’s doubtful though, so it’s better to prevent it. Also, you shouldn’t rely on Facebook alone for social marketing as it’s going to be disastrous wheFacebookok finally decides to delete your account. I haven’t been using Google Plus and Twitter that much lately but writing this article is like convincing myself to wake up.